WHY MEN AND WOMEN SHOULD DRESS PROPERLY 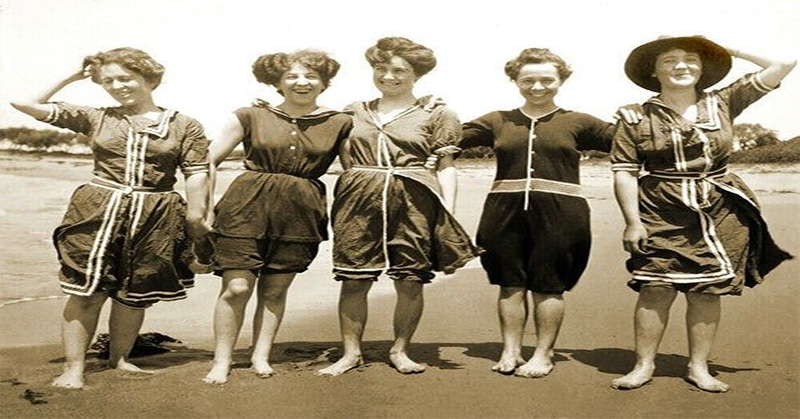 2015 UPDATE:  Today the grungy dress-down society has gotten much worse.  It is a sad state of affairs when a film from 1905 shows the very modest beachwear of both men and women to be much more modest and decent than the common everyday street-wear is of 2015.  Back then and even up to the cultural revolution of the 1960’s, women dressed like women and men like men.  Not so today.  (For example, when this author was in high school 1962-1966) only boys wore pants or trousers – the girls only wore dresses or skirts.  It didn’t need to be enforced.  This simply was normal standard of dress for that time and that was in a public school.  Take a look at the manner of dress of boys and girls today in public school, Catholic school and general society at large).

How men and women dress respective of their proper roles in a Christian society is not a light matter.  There is a God ordained standard of dress for both men and women handed down through the centuries by the Catholic Church.  Guidance for proper dress for both men and women can be found in the encyclicals of the popes.  Popes Pius XII and Pius XI as well as Cardinal Giuseppe Siri have spoken of this.  The Blessed Virgin Mary has also warned of this through Her apparitions, most notably Fatima.  If you doubt the gravity of this issue consider God’s Holy Word in Sacred Scripture:

“A woman shall not be clothed with man’s apparel, neither shall a man use women’s apparel; for he that doeth these things is abominable before God.”
[Deuteronomy 22:5]