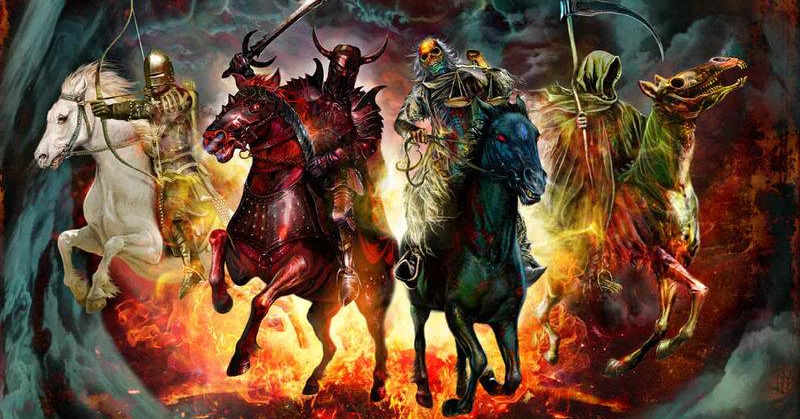 Apoc. 1:9-11 “I, John, your brother and partner in the tribulation and kingdom and patience that are in Jesus, was on the island which is called Patmos, because of the word of God and the testimony of Jesus.

“I was in the spirit on the Lord’s day, and I heard behind me a great voice, as of a trumpet, “saying, what thou seest write in a book, and send to the seven churches, to Ephesus, and to Smyrna, and to Pergamum, and to Thyatira, and to Sardis, and to Philadelphia, and to Laodicea.”

Bonnie Gaunt, End-Times researcher and author, has said the Book of the Apocalypse “is the most un-understood Book of the Bible.”  Indeed it is!  This is partly due to the symbolic and coded passages found within this Book of Revelation, and partly due to faulty interpretations of it as well.  Consequently, to most people, this most important Book of the Bible is more a book of mystery than one of revelation.

The writer of the Apocalypse arranged the scenes of these apocalyptic visions in a sevenfold structure; even in subordinate visions the writer keeps this structure.

The Book of the Apocalypse has its own literary form separate and distinct from all others.  This very unique form of writing has encoded within it hidden meanings and symbolic numbers.  Father Shamon tells us, “It grew out of times of persecution.  It was resistance literature, seeking to give hope to the persecuted.  So, it was coded, to keep the persecutor in ignorance.”  (APOCALYPSE: THE BOOK OF OUR TIMES by Rev. Albert Shamon, p ix).  Hence the need for this unique form of writing with its coded messages encrypted into its passages.

There is a hidden coded message in the numbers, symbols, and images used as well as a numerical code (called the Gematria).  This type of structured communication is called a cipher.  Several students of the Bible not realizing the foregoing will give faulty interpretations of these encrypted passages.  If we take the literal meaning of a symbol or image used, then we will end up with all kinds of interpretations.  The multiplicity of translations of passages of this enigmatic book has led to all kinds of errors and to the general confusion on the subject.  Hence the need to fully understand the literary form used and the context in which it was written. (The true mean­ing of these coded passages is not to be interpreted but like other revelation, DOCUMENTED with historical facts, scientific data, and Christian doctrine. In addition, Marian revelation, very much so, reinforces what is said in the Book of the Apocalypse.)

Another aspect of the literary form of the Apocalypse that must be comprehended, if one is to truly understand what is being conveyed, is the fact that such writing is cyclic not linear. Western writers think in linear fashion, in a straight line — whereas, Eastern writers think in a cyclic manner. Western writers develop their goal or plot point by point in straight-line progression un­til its conclusion. On the other hand, the Eastern writer presents his message in cyclic fashion repeating the message or what was said just before but in a completely different way. This repeti­tion in cyclic form is called “parallelism.” The Hebrews used it in the Book of Psalms. But unlike the Psalms, the writer of the Apocalypse used this repetition not only once but SEVEN TIMES.

The Book of the Apocalypse then, is a series of ciphered messages describing “End-Times” vi­sions of events and so-forth that were, are, and will be, using various symbols and images in a sevenfold cyclic pattern. Each message given is repeated seven times but in seven completely different imaginative and creative ways. As noted before, the reason for this unique pattern of writing is that the encoded truth is hidden from those of evil intent (and even from those of worldly ways) yet revealing it to those holy souls perceptive and discerning enough to decipher it.

Keep in mind the context in which this Book was written. It was written during the Christian per­secutions by the Roman Empire where everyone was to owe their allegiance to Caesar as their “Lord and God.” One has to understand the Empire of Rome in the early Christian era. covered 21/2 million square miles and encompassed people of different races and religions. Though no religion was universal at the time Caesar was. So, the citizen regardless of his religion or beliefs, had to burn incense before the statue of Caesar once a year and say, “Caesar is Lord and God.” Obviously, the Christian could not give the title, Lord and God, to anyone but Christ. Hence, the persecutions of Christians. It was in this “climate of fear” and persecution that the Book of the Apocalypse was written.

So this most mysterious Book of the Bible was written during a time of great persecution when Caesar was declaring himself God. He was in effect, an anti-god or an anti-Christ, one of several manifesting himself at the time (i.e. Appollonius born in Cappodocia the same year as Christ). There were several more Anti-Christ types yet to come down through the corridors of time to our own End-Times Anti-Christ Lord Maitreya in our present day.

Another factor to consider regarding this enigmatic book: Several of the visions dealt with events far in the future or “End-Times.” Imagine seeing things of a highly technological culture far in advance of one’s own! How would he describe it? What words would he use? Thus words chosen (inspired by the Holy Ghost) often had several meanings which transcended through time to de­scribe events and things seen in vision that were beyond normal human understanding.
The Book of the Apocalypse needs to be taken with all the above in mind with additional help in explaining our End-Time Age coming from the Synoptic Apocalypse of Jesus Christ in the Gos­pels of Mathew, Luke, and Mark. Additional help is gained from what lias been referred to as the Apocalypse of Daniel. The focus of these synoptic texts is on the future apocalyptic events in our time.

One last point to consider concerning this Book of End Time events: Catholic scholars tell us this Last Book of the Bible is one of hope, for it assures the Church of Christ’s Coming Victory even though the precise nature and time of this victory is hidden with God. This Book is also one of warning, that because of sin the attainment of this victory will not be without struggle against evil forces; and not without sufferings and sacrifices of God’s End-Time apostles, His chosen in the Remnant Church on Earth.

In addition, we have the Woman of the Apocalypse appearing all over the globe for the past 150 years or so adding this Virgin of Revelation’s own messages of hope and warnings.

So the Apocalypse need not be all “doom ‘n gloom” but is a time of hope and great expectations. Though there are ominous events of great portent taking place, there are also incredible and fan­tastic discoveries and wonders being uncovered. Even though we know we will face persecu­tions, tribulations and hardships, there will also be great promises fulfilled and graces and protec­tions afforded the End-Tunes Christian. Though the Apocalypse has its dark and foreboding side, it also has its hopeful and glorious side.

So there is a great need to study the Apocalypse in proper context; to put it in proper perspective so as to gain a greater understanding of the End-Times in which we now live.