THE THREE DAYS OF DARKNESS 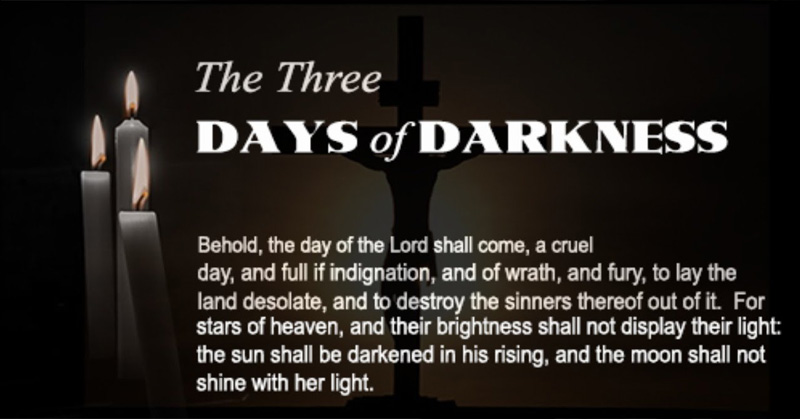 By examining the prophecies of the Three Days of Darkness, we can begin to understand what happens and what conditions will be like during this period. Also we are able to see from the descriptions of these Three Days of Darkness that the Comet of the Chastisement passing by the Earth in some way, the Sun’s nova (both these events caused by a tremendous galactic energy wave) , and the Earth quaking and changing orbit are all apparently simultaneous or at least overlapping events. As noted before, both the Comet of the Chastisement and the Sun’s nova contribute to the Three Days of Darkness. We can see from these descriptions what the Earth will be like during and immediately after these Three Days of Darkness.
It should also be pointed out that the Three Days of Darkness, much like the thousand years of peace, are more of a relative term symbolic of a certain period of time, not necessarily an exact 72 hour period of time. The period of darkness could take three, four, or more days to clear before the atmosphere gets back to normal. The Earth at first will be a dismal place but the atmosphere will have completely changed and be renewed.
Part of the Necedah Secret relates to the coming days of darkness. It says when the Sun novas (pulses and explodes) outward, “your Earth will fall into darkness because of the particles bursting away; it will darken and you will have from three to four days of darkness. And when this falls upon your ozone (the ozone layer) will come down upon the Earth and if you people go outside your homes during that period you will die … it will be poison, it will burst your lungs. There are some that might survive, depending on the individual and how much they consume. Our best advice for you at that time would be stay in your homes – seal all cracks in your homes. Have water in your homes because your electricity will not work. Remember, electricity will not work!                     We cannot tell you here when God the Father in Heaven will permit this … when this will take place. But that it will take place, Sister Mary Ann, you can rest assured of that.” (Necedah, May 31, 1977, Queenship of Mary).
Other prophecies warn of the Three Days of Darkness. Stigmatist Marie Julie Jahenny of La Fraudais, France was given this: “There will come three days of continued darkness. The blessed candles of wax alone will give light during the horrid darkness. One candle will last for three days, but in the houses of the godless they will not give light. During those three days the demons will appear in abominable and horrid forms; they will make the air resound with shocking blasphemies.
“The lightning will penetrate the homes, but will not extinguish the light of the blessed candles; neither wind nor storm nor earthquake will extinguish it. Red clouds like blood will pass in the sky, the crash of thunder will make the Earth tremble; lightning will flash through the streets at an unusual time of the year; the Earth will tremble to its foundations; the ocean will cast its foaming waves over the land, the Earth will be changed into an immense cemetery; the corpses of the wicked and the just will cover the face of the Earth.”
(Obviously, from this description, the Earth is undergoing a polar shift during the Three Days of Darkness, as well as a change in orbit).
“The famine that will follow will be great. All vegetation will be destroyed as well as three fourths of the human race. The crisis will come all of a sudden and the Chastisement will be world-wide.”
To Blessed Anna Maria Taiga: “Nothing will be visible and the air will be laden with pestilence, which will claim principally but not exclusively the enemies of religion… He who out of curiosity opens his window to look out or leave his house will fall dead on the spot.”
There is an incredible amount of revelation concerning the Three Days of Darkness. A comet passing by the Earth causing a considerable amount of earthquakes and volcanic eruptions seems to bring on the darkness and this darkness is then increased and prolonged by the Sun’s nova as indicated in the Necedah Secret. La Salette mentions “The Earth … will have been in a continual series of evolutions for three days.” An Ecuador mystic, Patricia Talbut was told in the late 1980s that the Earth would go out of its orbit for three days.
One very important and truthful prophecy of the coming Three Days of Darkness is that of Saint Padre Pio given in 1950. It is taken from a translation of Padre Pio’s personal letter to the Commission of Heroldsbach that was appointed by the Vatican. This establishes and testifies to the truth and reality of these revelations given by Our Lord, Jesus Christ. (Padre Pio was a Capuchin priest in Italy who bore the stigmata).