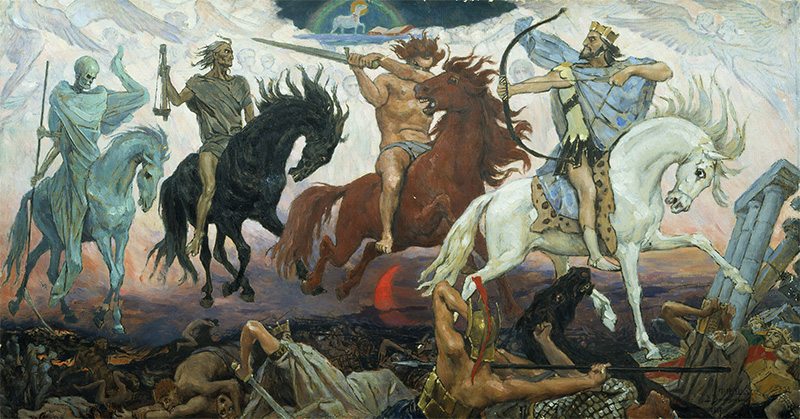 In the March 5, 1999 issue of Entertainment Weekly, was a picture in their Book Review Section which depicted a skeleton wearing a red cape and on his head was a party-cap with the year 2000 /span> printed on it. In his bony hand he held a quill-pen and in his other arm he was holding the globe of the world. The caption read: “APOCALYPSE NOW – It’s the end of the world ! Or at least that’s what these three unnerving but mordantly entertaining doomsday books would have us be­lieve.” This Book Review by L. S. Klepp mentioned three books: The End of the World edited by Lewis H. Lapham is a mostly first person account of world-class disasters throughout history; A Portable Apocalypse by Allan Appel and Apocalypse Pretty Soon by Alex Heard. Both later books treat the subject in either a light-hearted manner or with joking sarcasm or so it seems based on the review. Though the first book seems to treat the subject seriously it presents a false concept (the end of the world rather than the correct one, the end of an age). All three books, as do many in this day and age, present a distorted view of the Apocalypse.

The Apocalypse is very much misunderstood either not taken seriously or considered “doom ‘n gloom.” When the year 2000 came and went and prophetic events did not erupt on the scene as expected or anticipated, people became disillusioned and began to doubt whether such prophecies were even true. There was neither world-wide chaos nor apocalyptic natural catastro­phes. The scoffers could boast, “See it didn’t happen.!”

The above expectations and conclusions came from a faulty view of and an erroneous concept about the Apocalypse. When the attacks 9/11, 2001 happened a new insecurity and uncertainty of the future set in. It was in a word, as some people expressed it, “apocalyptic.” New interest and data on various apocalyptic phenomena and developing events began to be manifest. Earth changes in subsequent years (2002-2007) increased in frequency and intensity due in large part to increased solar activity affecting the magnetic fields of all planets in the solar system. Simul­taneously during this same period strange events were taking place (i.e. large numbers of birds mysteriously falling to Earth dead, honey bees mysteriously disappearing (called Colony Col­lapse Disorder, etc.). At the same time, the New World Order was (and still is) advancing its po­lice state agenda, pushing for a North American Union, and increasing surveillance with Mark of the Beast technology (RF1D, vera-chips, etc.) coming dangerously close to completion.

Though we still have some of the extreme views and faulty conceptions of the Apocalypse across the spectrum, we now have serious research being done that has uncovered very credible facts concerning how and when this apocalyptic scenario of the End Times will play out. Solid, well documented research into this End Times scenario with its strange and mysterious happenings is extremely important now more than ever to dispel the erroneous views of the Apocalypse. The Apocalypse has been made sensationalist by some while others have dismissed it as being para­noid or having happened already. False visionaries and self-proclaimed prophets along with tab­loid journalism have thrown the whole subject into a “fog” of confusion.   (Some have even claimed the Warning (also known as the Minor chastisement, the Awakening, the Illumination, the Minor Judgment, etc.)  was going to happen on such and such a date, etc.).  With apocalyptic signs and portents increasingly becoming more pronounced every day it becomes even more imperative that this subject be put into proper perspective so the one knows what to expect and how to prepare  in these uncertain times.  As the saying goes, “Don’t be scared, be prepared!”