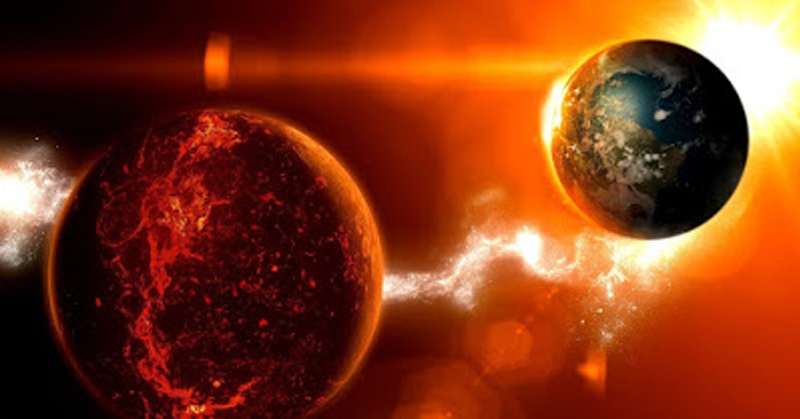 The seven years of tribulation and the Three Days of Darkness are now imminent courtesy of the arrival of the Nemesis-Nibiru system.

We are now on the verge of something “BIG” happening as the Earth changes are becoming more and more strange and extreme.  (See SOTT.net Earth Changes Summary for September).   Both the weather and seismic activity is increasing and intensifying dramatically in the last few months.  Check out the latest videos at Skywatch Media.   Also check out what is happening to the Mississippi River at Mr. MBB333 in the video, “Mississippi River Going Dry Above New Madrid.”

A greater awareness of the Planet X phenomenon seems to be becoming more widespread going beyond the Planet X truth movement.  Marshall Masters of www.yowusa.com has noticed this as we have here at Diamond Star Research.  For example, at a traditional Catholic website, www.traditioninaction.org, someone e-mailed in about the two-Sun phenomenon.  Keep in mind this site doesn’t usually cover this sort of thing but does post from time to time articles on the End Times Chastisement prophesied to come in our time.

If you go to this link [www.traditioninaction.org/Questions/B990_Petain.html] and scroll down to “Signs in the Sun,” there are two links to two Second Sun videos.

Though for the most part the modern Catholic world (and most everyone for that matter) is oblivious to the Planet X phenomenon, certain End Times conscious traditional Catholics are aware of prophecies warning of events that research has proven to be due to the passage of the Planet X (Nemesis-Nibiru) system.

From the prophecies of La Fraudais through Marie Julie Jahenny comes this interesting prophecy from Jesus Christ Himself:

“The ungodly eyes of all those souls will remain open, because I want them to see My Power.  I preserve it to them to see with their own eyes, the RADIANT PLANET I have coming from the remotest parts … under a frightening storm of fire, and under the signs of My anger, the whole sky will be crossed with bolts (of lightning) similar to the ones My Father thrust upon the world, when I offered Myself for the ransom of My people…”

This “radiant planet” coming from “the remotest parts” and “under a frightening storm of fire” is no doubt the Planet X system which will bring with it huge plasma lightning bolts.  Other Catholic mystics have confirmed the above prophecy.  Anna of Seredne, Ukraine prophecies:

“An unforeseen fire will descend over the whole Earth and a great part of humanity will be destroyed.”  (April 1, 1976).

Such a passage of the Planet X system will cause profound and dramatic changes on the Sun triggering solar burst of fire that will purify the whole Earth in these End of Days.

The Three Days of Darkness in Prophecy

The passage of the Planet X system will bring on the seven years of tribulation which will culminate in a purification of fire amidst three days of darkness.  These Three Days of Darkness have been prophesied to come by several Catholic mystics through the years including Mary Ann Van Hoof at Necedah, Wisconsin as well as Blessed Anna Marie Teigi, Marie Julie Jahenny, Julie Zagreb, Saint Padre Pio, Anna of Seredne, Ukraine, Mather Elena Leonard and others.  It has also been revealed at Akita (Japan) and in the secrets of La Salette, France and Fatima, Portugal.

During the Three Days of Darkness it is prophesied that the sky will be filled with blood-red clouds and fire will rain down from the sky (as mentioned in the prophecies of Akita and those of Saint Padre Pio).  This will be a worldwide event.  For an insight as to how this will transpire we sample a few of these prophecies here:

“…Your Earth will fall into darkness because of the particles bursting away; it will darken and you will have from three to four days of darkness.  And when this falls upon your ozone (the ozone layer)(it will) come down upon the Earth; and if you people go outside your homes during that period you will die – it will be poison, it will burst your lungs.  There are some that will survive, depending on the individual and how much they consume.  Our best advice for you at that time would be stay in your homes – seal all cracks in your homes.  Have water in your homes because your electricity will not work.  Remember, electricity will not work!  We cannot tell you here when God the Father in Heaven will permit this … when this will take place.  But that it will take place, Sister Mary Ann, you can rest assured of that.”    [Necedah – May 31, 1977.]

“If God permits the Sun to explode in the period they call the nova … the Earth will be thrown out of its orbit. Many will die and many will plunge into the waters for the water on Earth will go out of its boundaries and flood many countries.”  [Necedah – October 7, 1977.]

You will note in these prophesies that the Sun will experience a “nova” (the Sun’s corona will explode outward in a great flash of light) and this, believe it or not, will bring on the Three Days of Darkness as well as a rain of fire and subsequent purification of the Earth.  The Earth as noted in these prophesies, will undergo a change in orbit as well as a pole shift.  It is the Nemesis-Nibiru system that triggers these dramatic changes on the Sun (the nova or “killshot”) and on the Earth.

Other prophecies only confirm the above prophecies and add further detail:

“This catastrophe shall come upon the Earth like a flash at which moment the light of the morning Sun shall be replaced with darkness!  No one shall leave the house or look out of a window from that moment on. I Myself shall come amidst thunder and lightning.  There shall be great confusion because of this utter darkness in which the entire Earth shall be enveloped, and many, many shall die from fear and despair.”  [Saint Padre Pio – February 7, 1950.]

“…There will come three days of continued darkness.  The blessed candles of wax alone will give light during the horrid darkness.  One candle will last for three days, but in the house of the godless they will not give light.  During those three days the demons in abominable and horrid forms will make the air resound with shocking blasphemies.

“The lightning will penetrate the homes, but will not extinguish the light of the blessed candles, neither wind nor storms nor earthquake will extinguish it.  Red clouds like blood will pass in the sky, the crash of thunder will make the Earth tremble; lightning will flash through the streets at an unusual time of the year; the Earth will tremble to its foundations; the ocean will cast its foaming waves over the land; the Earth will be changed into an immense cemetery, – the corpses of the wicked and the just will cover the Earth.”    [Marie Julie Jahenny, Stigmatist of La Fraudais, France.]

The mystic, Marie Julie Jahenny gives even further detail of this passage event and of the aftermath to follow as well as a hopeful look at the future.

“The famine that will follow will be great.  All the vegetation will be destroyed as well as three fourths of the human race.  The crisis will come all of a sudden and the Chastisement will be worldwide.”

“Satan will triumph!  But after three nights, the earthquake and fire will cease.  On the following day the Sun will shine again.  Angels will descend from Heaven and will spread the spirit of peace over the Earth.  A feeling of immeasurable gratitude will take possession of those who survive this terrible ordeal – the impending punishment – with which God has not visited the Earth since creation.”

These La Fraudais prophecies given through Marie Julie Jahenny tell not only of a great fire and a period of darkness, but of an aftermath that includes a Earth covered with cadavers and infertile for some time to come as well as famine and worldwide devastation.  But hope is given in the fact that angels will descend to Earth to help the survivors.

There can be no doubt that all these Catholic prophecies (including those we did not quote) tell of a rain of fire, the darkening of the Sun for a specific period of time (three days), blood-red clouds, great earthquakes, and plasma lightning bolts all descriptive of the effects of the passage of the Planet X system and related changes on the Sun.

The time is now at hand – the time of passage is drawing very near.  Time is ever more running out!  We are now experiencing the “birth pangs” of a coming new era as this era is fast coming to a close.  We are on the brink of the seven years of tribulation which will culminate in the Sun’s nova (purification of mankind) and its accompanying Three Days of Darkness.

The signs for this transition period between ages (the seven years of tribulation) are everywhere.  This will NOT be the end of the world but the end of the world as we now know it.  The Planet X (Nemesis-Nibiru) system – the Great Destroyer, the “Wrecking Ball of Civilizations” – is now upon us.

It is time to get ourselves right with God before the Great Warning triggers the Great Tribulation years.  The Angels of God can protect us but only if we are found worthy of that protection.  Holy men of God were protected during the Hiroshima and Nagasaki atom bomb attacks and suffered from no ill effects. (This has been documented).  Our survival solution is a spiritual one.  Prepare now while you still have time!