ON THE FALSENESS OF FRANCIS 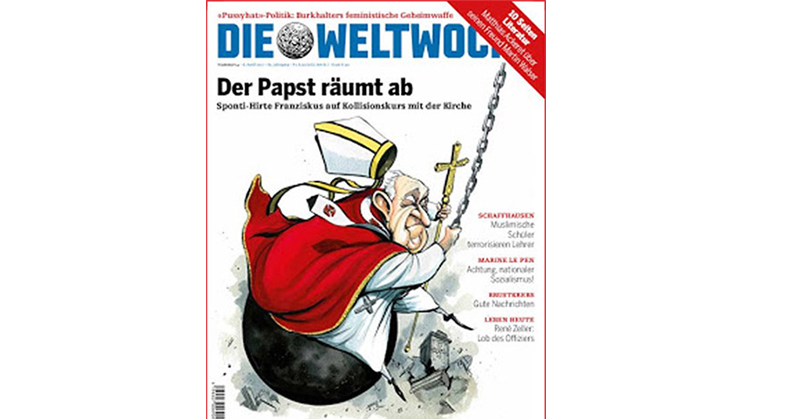 Or: Is Bergoglio Still Your Pope?

[Author’s Note: This author is thoroughly and completely fed-up with the false reality we live in today, especially on the sick, soft, sodomite society made possible by a counterfeit church and a counterfeit culture as well as man’s gullible stupidity.  They are all part of the Great Apostasy and the Greatest Deception in the history of the Church.]

This article will be kept short and to the point.  So here goes.  Jorge Bergoglio (a.k.a. “Pope” Francis) is not the pope of the Catholic Church; he isn’t even Catholic or Christian for that matter.  The Vatican II, Novus Ordo sect that masquerades as the “Catholic Church” is a counterfeit church, the whore of Babylon of Apocalypse 17.

This is not going to be a long drawn out article with copious amounts of documented sources.  No, do your own research.  We’ve already done ours and we have the proof of what we say here.  If you don’t believe that, look up this source: “THE CHURCH IN ECLIPSE: THE POPE IN EXILE” at www.diamondstarlightbeacon.com/Church_in_Eclipse.htm.

So there you have it.  Is Jorge Bergoglio still your “pope”?  After all the above and he is still your pope?  Oh, I get it – it’s because he hasn’t been declared a non-pope by a council of cardinals.  Well guess what this reason and all the lame-duck (or should we say lame-pope) reasons still doesn’t get it.  Can you see a council of Masonic cardinals calling for him to step down?  (In the quotes below it is proven the Church teaches that a pope that falls into heresy is deposed by God, ipso facto (by the very fact).  Now let’s get this straight – for the following reasons this one Jorge Bergoglio is most certainly not the pope, never was, isn’t now nor will ever be for several reasons, only some of which I will list as follows:

“Further, if ever it should appear that any bishop (even one acting as an archbishop, patriarch or primate), or a cardinal of the Roman Church, or a legate (as mentioned above) or even the Roman Pontiff (whether prior to his promotion to cardinal, or prior to his election as Roman Pontiff), has beforehand deviated from the Catholic faith or fallen into any heresy, We enact, decree, determine and define:  Such promotion or election in and of itself, even with the agreement and unanimous consent of all the cardinals, shall be null, legally invalid and void… Those so promoted or elected, by that very fact and without the need to make any further declaration, shall be deprived of any dignity, position, honor, title, authority, office and power.”  [Bull: Cum Ex Apostolatus (16 February 1559) – Pope Paul IV.]

“The Pope should not flatter himself about his power nor should he rashly glory in his honour and high estate, because the less he is judged by man, the more his is judged by God. Still the less can the Roman Pontiff glory because he can be judged by men, or rather, can be shown to be already judged, if for example he should wither away into heresy; because he who does not believe is already judged.  In such a case it should be said of him: ‘If salt should lose its savor, it is good for nothing but to be cast out and trampled under foot by men.’”  [Si Papa (1198) – Pope Innocent III.]

“If indeed such a situation would happen, he [the Roman Pontiff] would, by divine law, fall from office without any sentence, indeed, without even a declaratory one.  He who openly professes heresy places himself outside the Church, and it is not likely that Christ would preserve the Primacy of His Church in one so unworthy.  Wherefore, if the Roman Pontiff were to profess heresy, before any condemnatory sentence (which would be impossible anyway) he would lose his authority.”  [Institutiones Iuris Canonici (1950) – Coronata.]

“Now when the Pope is explicitly a heretic, he falls ipso facto from his dignity and out of the Church.”  [St. Francis de Sales, Doctor of the Church (1622).]

“If, however, God were to permit a Pope to become a notorious and contumacious heretic, he would by such a fact, cease to be Pope, and the Apostolic Chair would be vacant.”  [St. Alphonsus Maria Liguori, Doctor of the Church (died 1787 A.D.). Verita della Fede, III, VIII, 9-10.]

“Through notorious and openly divulged heresy, the Roman Pontiff, should he fall into heresy, by that very fact (ipso facto) is deemed to be deprived of the power of jurisdiction even before any declaratory judgment by the Church … A Pope who falls into public heresy would cease ipso facto to be a member of the Church; therefore, he would also cease to be head of the Church.”  [Canon Law – (1943) – Wernz-Vidal.]

“Not a few canonists teach that, outside of death and abdication, the pontifical dignity can also be lost by falling into certain insanity, which is legally equivalent to death, as well as through manifest and notorious heresy.  In the later case, a pope would automatically fall from his power, and this indeed without the issuance of any sentence, for the first See (i.e., the See of Peter) is judged by no one … The reason is that, by falling into heresy, the pope ceases to be a member of the Church.  He who is not a member of a society, obviously, cannot  be its head.”  [Introductio in Codicem (1946) – Udalricus Beste. ]

“At least according to the more common teaching the Roman Pontiff as a private teacher can fall into manifest heresy.  Then, without any declaratory sentence (for the supreme See is judged by no one), he would automatically (ipso facto) fall from power which he who is no longer a member of the Church is unable to possess.”  [Epitome Iuris Canonici (1949) – A. Vermeersch.]

“For, in the first place, it is proven with arguments from authority and from reason that the manifest heretic is ‘ipso facto’ deposed. The argument from authority is based on St. Paul (Titus 3:10), who orders that the heretic be avoided after two warnings, that is, after showing himself to be manifestly obstinate – which means before any excommunication or judicial sentence.  And this is what St. Jerome writes, adding that the other sinners are excluded from the Church by sentence of excommunication but heretics exile themselves and separate themselves by their own act from the body of Christ.”  [St. Robert Ballermine, De Romano Pontifice, II. 30.]

“…For men are not bound, or able to read hearts; BUT WHEN THEY SEE THAT SOMONE IS A HERETIC BY HIS EXTERNAL WORKS, THEY JUDGE HIM TO BE A HERETIC, PURE AND SIMPLE, AND CONDEMN HIM AS A HERETIC.”   [St. Robert Ballermine, De Romano Pontifice, II, 30.]

“There are certain causes which effect the tacit (silent) resignation of an office, which resignation is accepted in advance by operation of the law, and hence is effective WITHOUT ANY DECLARATION.  These causes are … (4) if he has publicly fallen away from the faith.”  [Canon 188.4, 1917 Code of Canon Law.]

There you have it!  THAT IS THE TEACHING OF THE TRUE CATHOLIC CHURCH!  Take it or leave it!  It’s your choice.

Now for those that think this means the Gates of Hell have prevailed, let me make one thing clear:  According to Saint Pope Leo IX, there is no doubt as to the identity of the Gates of Hell – They are “the disputation of heretics.”  Pope Vigilus has told us that the Gates of Hell are “the tongues of heretics.”  For those that think if we don’t have a pope in office means the Gates of Hell have prevailed are wrong.  They have it backwards.  If Jorge Bergoglio is the pope then the Gates of Hell have certainly prevailed for the Gates of Hell are “the tongues of heretics” and Bergoglio is most manifestly a pertinacious heretic.  Father Paul Kramer does get this much right: He says “Jorge Bergoglio is absolutely and most certainly a formal heretic.”  He goes on to say, “That Jorge Bergoglio is a manifest formal heretic IS PLAINLY DEMONSTRATED BY HIS OUTRIGHT AND EXPLICIT REJECTION OF SOME OF THE MOST BASIC DOGMAS OF CHRISTIAN BELIEF – notably his rejection of Christ’s explicit teaching on evangelizing and converting all nations; his rejection of the dogma of absolute necessity of faith for justification; his pagan notion of ‘God’ which explicitly rejects the dogmatic Christian doctrine of God as distinct from and infinitely transcending the created universe; which he contemptuously dismisses as a ‘vague ideas in the clouds,’ a ‘god spray,’ and a ‘Catholic God.’”  [“The Third Secret of Fatima,”- Part III.  The Servants of Jesus of Jesus and Mary, Issue 3, December 2017, p 1. Emphasis, author’s.]

So for those who can’t stand the sedevacantist position, you need to face the real truth as it exists:  The Vatican II Novus Ordo sect is not the Catholic Church and Jorge Bergoglio is not a pope.  Even Remnant editor, Michael Matt says,  “Our Pope has lost the faith.”  Well, Mr. Matt, if he doesn’t have the faith then he is an apostate and he can’t be the pope.  This false pope has an agenda: To destroy what’s left of Catholicism and prepare for the coming of the Antichrist.  Oh, one more thing: Your false pope Francis says, “The least serious sins are sins of the flesh.” Our Lady of Fatima told Jacinta Marto, “More souls go to hell for sins of the flesh than any other sin.”  Now who’s moral advice would you rather follow?  Enough said!  Below are some helpful sources for you to do your own research.

www.mostholyfamilymonastery.com.   [Note: while there are a number of good articles and videos exposing Francis, Schonborn, Cupich, Martin, Timothy Dolan, Vatican II etc., we don’t agree on their stance on the End Times nor their position against baptism of desire and of blood.  But it is a good resource site.]

Also see our other article: “Is the Novus Ordo Church the Catholic Church?”