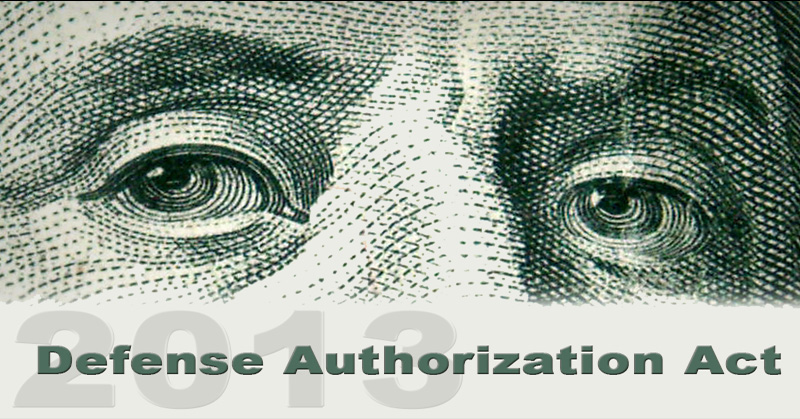 Global Research  reports: “With minimal media debate, at a time when Americans were celebrating the New Year with their loved ones, the ‘National Defense Authorization Act’ H.R. 1540 was signed into law by President Barack Obama. The actual signing took place in Hawaii on the 31st of December.
“According to Obama’s ‘signing statement,’ the threat of Al Qaeda to the Security of the Homeland constitutes a justification for repealing fundamental rights and freedoms, with a stroke of the pen. The relevant provisions pertaining to civil rights were carefully esconded in a short section of a 500+ page document.
“The controversial signing statement … is a smokescreen. Obama says he disagrees with the NDAA but he signs it into law.
“’I have serious reservations with certain provisions that regulate the detention, interrogation, and prosecution of suspected terrorists.’”             (Global Research. Jan. 1, 2012).
We now have what is a so-called “democratic dictatorship” in America – not yet enforced but that will come later this year when martial law is declared. The Global Research report goes on to say:
“The ‘National Defense Authorization Act’ (H.R. 1540) repeals the US Constitution. While the façade of democracy prevails, supported by media propaganda, the American republic is fractured. The tendency is towards the establishment of a totalitarian State, a military government dressed in civilian clothes.
“The passage of NDAA is intimately related to Washington’s global military agenda. The military pursuit of worldwide hegemony also requires the ‘Militarization of the Homeland,’ namely the demise of the American Republic.
“In substance, the signing statement is intended to mislead Americans and provide a ‘democratic face’ to the President as well as to the unfolding post-911 Military Police State apparatus.
“The ‘most important traditions and values’ in derogation of the Bill of Rights and the US Constitution have indeed been repealed, effective on New Year’s Day, January 1st 2012.
“The NDAA authorizes the arbitrary and indefinite military detention of American citizens.” (“The Inauguration of Police State USA 2012: Obama Signs the ‘National Defense Authorization Act’” by Michel Chossudovsky.                 Global Research. Jan. 1, 2012).
Furthermore, the detention camp activation follows preparations for civil unrest. This is the final “legal” maneuver before the final takeover begins. This takeover will begin after the artificially created crisis reaches a critical point to give the excuse to declare martial law. This crisis will be a combination of economic collapse and war (and a possible artificial triggering of both the San Andreas fault and the New Madrid fault) unleashed upon the American people. The military will designate Americans as the enemy during the economic collapse and civil disorder that follows.
The government has tried to cover-up the document to wage war on Americans and to inaugurate a police state in America. FEMA camps are now being staffed for standby operation and put in readiness for this eventuality.
An INFOWARS report states:  “What HAS been exposed publicly points directly to overt takeovers of the constitutional government via martial law, the use of troops on the street (in violation of Posse Comitatus) and a definitive takeover of all communications, including the establishment of secure communications lines for the Continuity of Government controllers. More to the point, it validates the worst of fears – that rhetoric issued from political leaders in America demonizing its people as potential terrorists relates to real plans, albeit obscured from popular public knowledge, to target and indefinitely detain dissidents and other ordinary citizens any time during declared emergencies, or for any pretext of national security.” (“Government Censors Document Revealing Plans to Wage War on Americans” by Aaron Dykes. December 21, 2011).
Michel Chossudovsky of Global Research has reported on plans and preparations to attack Iran. Military alliances are forming and war games for “simulating” World War III are ongoing at the present time. The operations for doing this go under names like “Theater Iran Near Term” (TIRANNT) (pronounced “tyrant”) and “Vigilant Shield 07.” This Global Research report states, “The core assumption behind Vigilant Shield 07 is ‘Global Warfare.’ In light of recent war preparations directed against Iran, the Road to Conflict in the Vigilant Shield 07 war games should be examined very carefully.” (“When War Games Go Live: Preparing to Attack Iran ‘Simulating World War III’” by Michel Chossudovsky. Global Research. January 8, 2012).
This report further states,    “The simulations are produced on the assumption that Iran constitutes a nuclear threat and that Russia and North Korea – which are allies of Iran – will attack America and that America and its allies will wage a pre-emptive (defensive) war.” (Ibid). This so-called “assumption” of Vigilant Shield 07 that “Iran – will attack America” is in perfect agreement with what the New World Order elite told Lindsey Williams – that they plan to force Iran into firing the first shot.
Also, a terrorist attack on America is also contemplated in Vigilant Shield 07 giving the excuse for the aforementioned National Defense Authorization Act and other police state measures to detain American citizens under the pretext of “national security.” The whole “simulating World War III” scenario is to provide Global Security (for the New World Order elite) while destroying our rights and freedoms in the process. This is the final attempt by the Powers-That-Be to effect the demise of the American Republic and to establish a World Government “utopia.”