MARK OF THE BEAST – ANTICHRIST TRANSFORMATION OF HUMAN SUBJECTS 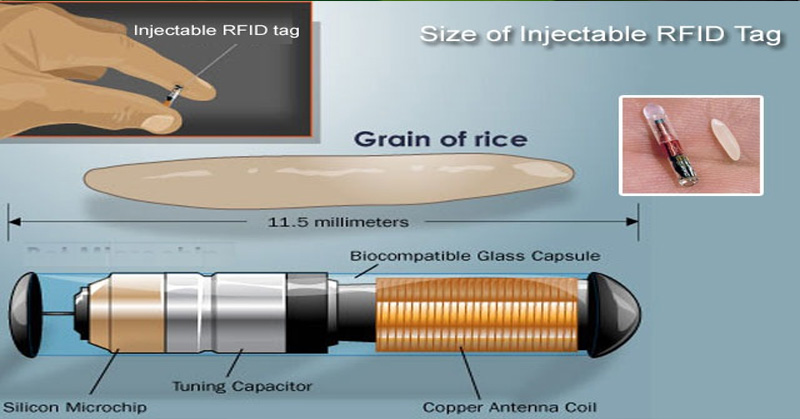 Another ongoing End Times scenario now unfolding is the preparation to deliver a transforming “Mark of the Beast” upon the souls of humanity. There are two aspects of this transforming mark. One is that it involves having an implantable microchip put into one‘s body that carries the entire information (medical, political, financial, family history, etc.) allowing one to transact any type of business, etc. This first informational file aspect of the chip relates directly to Apocalypse 13:16-17: “And it will cause all, the small and the great, and the rich and the poor, and the free and the bond, to have a mark on their right hand or on their foreheads,
“And it will bring it about that no one may be able to buy or sell, except him who has the mark, either the name of the beast or the number of its name.”

the economic and technological infrastructure of the world will eventually operate on the assumption that citizens are chipped. At the time of writing, people can go to certain clubs and pay for things with an implanted chip, which is the first step. The obvious next step is simply a gradual increase in 238 the number of places that accept this method of payment, and then we are potentially moving towards the troubling situation of only having the option of using an implanted chip to pay for goods and services.” (Ibid, p 22).
The prime company being used to push this microchip agenda is PositiveID, formerly known as Verichip Corporation. The CEO of this corp- oration, Scott Silverman made an appearance on NBC News. In response to a question concerning privacy and the intrusion of Big Brother, Silverman noted how concerns about this in the last two years have gotten less and less. He went on to explain that “when the acceptance rate of the product goes up significantly like it has, some of the privacy concerns go down. But to answer your question directly, Lester, what most people are concerned with is the invasiveness of this; that it goes in your body. And as we know with pacemakers and other medical devices, that when people accept it for its applications and for its ability is when it‘ll work its way into society. It won‘t be tomorrow, it won‘t be next week. But two, three, five years from now, slowly but surely it‘ll work its way into the mainstream.” (As quoted in NEXUS, Vo. 17, No. 3, “Waking Up To the Human Microchip Agenda, p 19).
The “two, three, five years from now” comment indicates an approxi- mate time-frame when the implantable microchip will be accepted and even become mandatory. This brings us to the so-called “Affordable Health Care Choices Act” of 2009 (Obamacare). Buried deep in this law is some rather ominous wording concerning an implantable chip RFID (radio frequency identification) type supposedly for medical reasons.
On page 1001, in subtitle C. National Medical Device Registry which states, “The Secretary shall establish a National Medical Device Registry (in this subsection referred to as the registry) to facilitate analysis of post market safety and outcomes data on each device that (A) is or has been used in or on a patient; (B) and (i) a class III device; or (ii) a class II device that is implantable, life-supporting, or life-sustaining.”
Then on page 1004, the meaning of “data” is described in Section B: “In this paragraph, the term ‘data‘ refers to information respecting a device described in paragraph (1), including claims data, patient survey data, standardized analytic files that allow for the pooling and analysis of data from disparate data environments, electronic health records, and any other data deemed appropriate by the Secretary.” (The Secretary referred to here is the Secretary of Health and Human Services).
What exactly is a class II implantable device? This class II implantable device is a microchip technology approved of by the FDA (Food and Drug Administration) in 2004 and is an implantable radio frequency transponder system for patient identification and health information.” The purpose of the class II device is to collect data in medical patients such as “claims data, patient survey data, standardized analytic files that allow for the pooling and analysis of data from disparate data environments, electronic health records, and any other data deemed appropriate by the Secretary” as per Section B above.
The new law, when fully implemented, will provide the framework for making the U.S. the first nation in the world to require each and every citizen to have implanted in them a RFID microchip for the purposes of controlling medical care and more. In this Obamacare law passed in 2010, on pages 1001 through 1008, is the definition and purposes of the National Medical Device Registry. On page 1006 it states “to be enacted within 36 months upon passage.” (That means approximately in 2013). On p 503 it speaks of “…medical device surveillance.” (The word, surveillance is from the root word in Old French meaning to “watch over.”) This implantable RFID class II Medical Device paves the way for initiation of the Mark of the Beast. Some people (more than is generally realized) have already been implanted.
It appears from all we have learned that the implantable microchip “Mark of the Beast” is very close to becoming a Biblical prophecy fulfilled. Our generation is very soon to see this come to pass. In fact, Tom Horn, co- author of Forbidden Gates, asks this question: “Has an end-times spirit indeed been pushing for adoption of this technology this generation?” He then asks us to consider the following:
“*According to some Bible scholars, a biblical generation is forty years. This is interesting, given what we documented in our book Apollyon Rising 2012 concerning the time frame 2012-2013, from which, counting backward forty years, one arrives at the year 1973, the very year Senior Scholastics began introducing school kids to the idea of buying and selling in the future using numbers inserted in their foreheads. In the September 20, 1973, feature “Who Is Watching You?‘ the secular high school journal speculated:

The above Mark of the Beast technology will most likely be forced upon the world‘s population sometime during the period of worldwide nuclear and biological warfare as outlined in the Anglo-Saxon Mission. These events will all converge during the Great Tribulation.