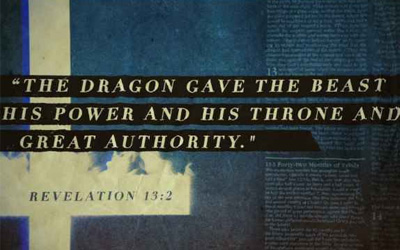 Identifying the “man of sin” has been a quest of many with varied speculations as who the Antichrist really is. Napoleon, Martin Luth er, Hitler, and several others have been called Antichrists. There have been a number of false christs as far back in this millennium including Simon Bar Koseva who came not many years after Christ. Another was Serene of Syria in the eighth century. There were several others who have come and gone. With the exception of Apollonius who was a powerful Antichrist at the time of Jesus Christ, most of the Antichrists did not wield the power or the satanic deception to gain that much control.
Just who is the Antichrist? In identifying who he is we must first keep in mind that Satan (Lucifer) always is the “ape” of God. That is, he mimics God and His plan. Some of the many things prophesied about the True Christ have been mimicked by the false Christ. Let’s take a look at some of the prophecies about the Antichrist:
He shall be named Apollyon. (Apoc. 9:1 He shall be from Asia Minor. (Apoc. 2:13)
He shall have no desire for women. (Dan. 11:37)
He shall cause fire, or lightning, to come down from heaven an d he will perform satanic miracles. (Apoc. 13:13; Luke 10:18)
He shall be worshiped as God, in the Temple of God. (Thess. 2:4)
The number of his name shall be 666. (Apoc. 13:8)