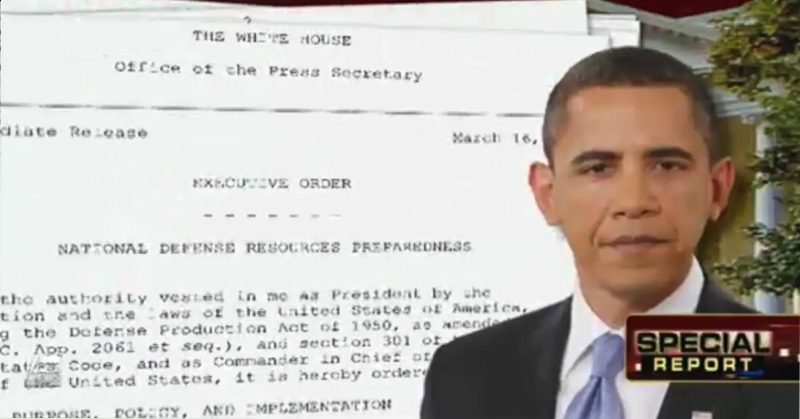 Obama has signed at least 923 Executive Orders in 40 months! This is just another sign that Martial Law is imminent. All that is needed now is an event to happen that will be considered a national emergency and Martial Law will be declared.
These are the major Executive Orders that have been issued thus far:

EXECUTIVE ORDER 10990 allows the government to take over all modes of transportation and control of highways and seaports.

EXECUTIVE ORDER 10995 allows the government to seize and control the communication media.

EXECUTIVE ORDER 10997 allows the government to take over all electrical power, gas petroleum, fuels and minerals.

EXECUTIVE ORDER 10998 allows the government to take over all food resources and farms.

EXECUTIVE ORDER 11001 allows the government to take over all health, education and welfare functions.

EXECUTIVE ORDER 11002 designates the registration of all persons. Postmaster General to operate a national registration.

EXECUTIVE ORDER 11003 allows the government to take over all airports and aircraft, including commercial aircraft.

EXECUTIVE ORDER 11051 specifies the responsibility of the Office of Emergency Planning and gives authorization to put all Executive Orders into effect in times of increased international tensions, and to advise and assist the President.

EXECUTIVE ORDER 11310 grants authority to the Department of Justice to enforce the plans set out in Executive Orders, to institute industrial support, to establish judicial and legislative liaison, to control all aliens, to operate penal and correctional institutions, and to advise and assist the President.

EXECUTIVE ORDER 11921 allows the Federal Emergency Preparedness Agency to develop plans to establish control over the mechanisms of production and distribution of energy sources, wages, salaries, credit and the flow of money in U.S. financial institutions in any undefined national emergency. It also provides that when a state of emergency is declared by the President, Congress cannot review the action for six months.

As of this writing Obama has issued at least two more Executive Orders. One of these is to “harmonize” U.S. economic relations with the rest of the world. The other is to combine the Departmet of Homeland Security with the private sector to prepare for Martial Law. The Evil Forces are constantly integrating the nations of the world into a globalized world economy, a world political union and a world Antichrist religious system with the Mark of the Beast as the central key aspect to make this world dictatorship work.

All is rapidly being put in place in preparation for some triggered event. There has been considerable speculation and debate as to what this triggered event might be. Author and researcher of underground activity, Richard Sauder asked some very interesting questions in this regard. He asks, “Do the clandestine movers and shakers inside the military-industrial-espionage complex know something that the rest of us don’t?”

Mr. Sauder actually posed such type questions to one of his sources and as Richard says, “got a wonderfully evasive, sphinx-like answer that frankly raised more questions than it answered.” He goes on to say, “As best as I could parse the response, it seems that at least some, and perhaps many, underground and underwater bases and tunnels are preparations for the following possibilities in the relatively near term (say within the timeframe of the next several years to next few decades).” He then lists the following possibilities:

• Potential nuclear war.
• Changes in physics of rotation of the Earth, i.e., a pole shift, or axis relocation.
• Reversal of Earth’s magnetic field.
• Entering a galactic dust cloud.
• Asteroid and/or comet strikes.
• Massive, sudden climate change.
• Social, political and economic chaos resulting from any of the preceding.
• A combination of any one or more of the above.

Richard Sauder’s sources all indicate that some “very dramatic events may be just around the corner. It seems as if those in the know are making massive, extremely expensive preparations for something.” His conclusions he has come to regarding the information he has received through these sources is that some approaching cataclysm is the reason these people are so troubled.

It appears from the information received from accounts most of which Mr. Sauder received directly from people who worked for the military-industrial complex, in some cases uniformed military, indicate that a possible made-made cataclysm is in the works. Sauder then states that it may be technologically possible to “design, build and deploy continent-busting weaponry that far exceeds the destructive power of nuclear weaponry…” Sauder asks if it is morally advisable to do so. He asks, “Under what conceivable set of circumstances would a military command structure literally unleash hell on Earth, such that entire continents, or regions of continents were laid waste? What sane person would set in motion such a series of events?” (“Approaching Cataclysm? A Conclusion of the Underground Bases” by Richard Sauder. The Intell Hub website – May 15, 2012. Emphasis, ours).

It appears more and more likely, as time goes on, that the event being prepared for which Martial Law will be declared is a triggered man-induced “natural” disaster. It is very likely that the New Madrid fault system will be triggered as well as the San Andreas fault system. If a seismic and volcanic event is triggered in the Canary Islands, a giant tidal wave may be unleashed. Is it even possible to induce a pole shift? We will examine all these possibilities in the next two subchapters.