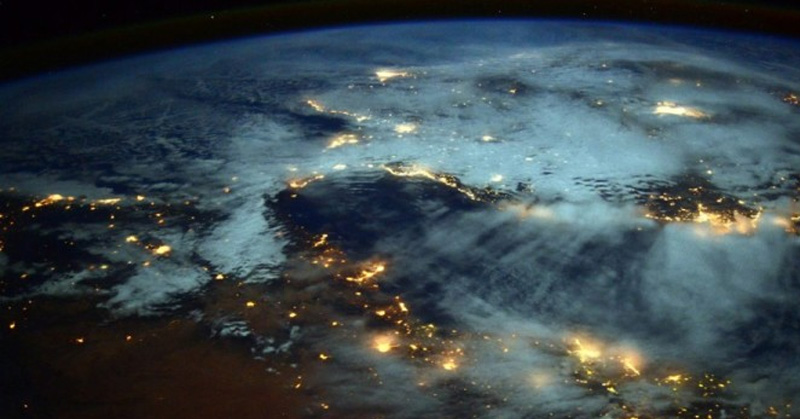 The world is sinking ever deeper into moral perversity and chaos.  This moral impurity and corruption is leading directly to the decadence of society and the eventual collapse of civilization as we know it.  At such a point in history that we are now at, the Creator of All, God Almighty, has only one recourse:  That is, to “clean house,” purify the Earth and start over.  This has happened before (the Great Deluge in Noah’s day) and it is very close to happening again.

The instrument of God’s choice to do just that is His “Wrecking Ball of Civilizations” – the Destroyer, the incoming Nemesis-Nibiru system.  The signs of its imminent approach to our home planet are everywhere:  the extreme weather (getting even more extreme); seismic and volcanic upheaval at unprecedented levels; the shifting of both the magnetic poles and the geophysical poles; the Earth wobble and its resulting affects – sink holes, landslides , etc.; and the frenzied preparations into underground sanctuaries of the world’s elite that may well end up being their tombs.  People everywhere are sensing “something” is about to happen even if they quite can’t grasp what.  The Great Tribulation, a seven year period not far off, will begin the “sorrow of sorrows” about to be inflicted upon an evil world as according to prophecies.

Evidence of the Nemesis-Nibiru system approaching may be seen in several videos at the Skywatch Media web channel.  The effect of this system on our neighboring planet, Mars can be seen in this video.

The effects of the Nemesis-Nibiru system are becoming much more intense.  We are in an ever-increasing geophysical shift of the poles which can be seen in ongoing Earth wobble.  This is giving rise to ever greater Earth changes.

Correspondingly, the position of the Sun at high noon at the summer solstice (June 21st) also changed.  Sun at high noon on the summer solstice used to be in central Mexico.  In 2005 it crept North until it was in the central U.S.  By 2014 it had reached the U.S.-Canadian border.  (That’s about 2,000 miles).  In 2015 it dropped further South again.  As of 2016 the Sun’s position was at about 41 degrees North latitude.  This position could change yet again.  All this abnormal sunrise-sunset and high-noon positions are due to Earth wobble and a shifting of the geophysical poles.  The big event (the flip of the poles at the tipping point) is yet to happen.  As this phenomenon increases steadily as the Nemesis-Nibiru system advances on our location, Earth changes will increase and intensify dramatically.

All the aforementioned Earth changes, Earth wobble and also the rise in meteor reports as well as changes in our solar system, are due to the incoming of the Nemesis-Nibiru system into the inner solar system.  Cosmic rays are now pounding the Earth and this planet is being hit by two solar winds – one from the Sun and the other from the Brown Dwarf intruder.  Relative to this last point, see the Higher Truth Channel video that explains this very well.

Why is all of this happening now in our “End of Days” age?  Most certainly it is part of God’s plan to purify the Earth.  It has been prophesied in the Bible, in the prophecies of the Mother of God (Fatima’s Third Secret, the La Salette Secret, at Akita, Japan, and in the Necedah Secret and messages on the Great White Fire).  It is interesting to note that Necedah’s Message to the Elect (July 2, 1954) states:  “the geographical aspect of whole continents will be violently altered.”  Then we have FEMA recently stating that there will be “separation of land masses.”  These two descriptions of coming geophysical events sound eerily similar.

Early Christian prophecies as well as those of the Hopi Indians, Mother Shipton and others mention the coming cataclysms and purification of mankind.  Some of these prophecies given years even centuries ago are turning out to be highly accurate.  The most pertinent Christian End Times prophecies given in recent times are condensed into a little booklet, “The Three Days of Darkness: The Coming Purification” (as well as the links below) gives insight into what is just before us:  The Great White Fire (the coming mini-nova of the Sun – what Major Ed Dames calls the “Killshot”),  Padre Pio’s “rain of fire,” the Fatima Secret, the Great Warning, the pole shift (which Major Ed Dames disclosed in August, 2016 would be about 12 degrees), the three days of darkness, and the coming tribulation period.

The above named booklet can be asked for by name at (608)-565-2617 or e-mail at shrineinfo@queenoftheholyrosaryshrine.com.  Also check out our Diamond Star Research website here and here.

As for surviving the coming cataclysms and purification, helpful information can be accessed here  as well as our links page  (Scroll down to the “Survival” links).

The arrival and “roll-out” scenario time-line for this to come to pass is SOON!  It appears (based on research of what is now occurring across our home planet) that 2017-2018 could be the beginning of the End.  How many growing seasons do we have left?  How much more time do we have to stock up on food and supplies?  How much time is there left to get our spiritual life in order?  Check out the resource links provided in this article as time is fast running out!

As to why this is happening in our time and what the cause and affect is of our moral and cultural condition in relation to the cataclysms of the Purification, see this article and this article.

These articles will give you a good insight as to why the “Wrecking Ball of Civilizations” is now coming to this Earth.  Prepare now!  “Tomorrow” may be too late!