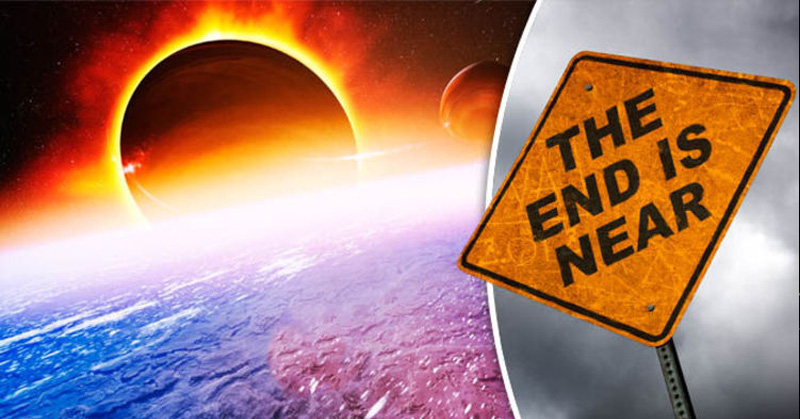 At the beginning of this article we mentioned that part of the cause, a large part, of the increase in strange weather and Earth changes is due to the increased solar activity. Scientists are quite alarmed at what has been going on, for our sun has been having a great increase in the number of storms, flare ups, and mass coronal ejections. What could be the cause of this increased hyper-activity of the sun that in turn is affecting the Earth with a great number of Earth changes (i.e. earthquakes, volcano eruptions, storms, alterations and fluxes in the magnetic field, strange weather patterns, etc.) Scientists and researchers investigating this say it has to have an EXTERNAL CAUSE. Earth changes (especially of this magnitude) do not occur on their own, they have to have an external triggering mechanism.     As we have reported elsewhere in our research (APOCALYPSE BEACON, Winter. 2003. “Planet X· Comet of the Chastisement?‘? our government has known some 35 years ago and has confirmed it since, that a large comet like planetary body with an entourage of similar stellar objects (numbering in the hundreds) have been discovered all traveling from one direction in space and heading towards our solar system. More and more reports have been coming out concerning this, some very credible, others mixed with disinformation. It has become apparent to those who have studied this that there is a great effort being expended by the New World Order Elite to keep the “lid” on this. This is shaping up to be one of the biggest cover-ups and disinformation campaigns ever launched to keep this information, the real truth, from reaching the public.

even decades have noticed that “the amount of frequency and magnitude has risen so fast in the last six years it is unbelievable. It should in fact have made national headlines … But remarkably our news media doesn’t even say anything about such earth shattering news, perhaps just a passing comment” (Mr. Mutley as quoted in DELICATE EARTH: HISTORY, SCIENCE, PLANETX by MarkHazzlewood,p 184).

The same source states, “More and more proof is mounting that the USGS, like NASA and many other U.S. government agencies, are simply sweeping data under the rug in hopes the public, and especially the mainstream media will not see the information. ” (Ibid, p 184. Emphasis in the original}.
In regards to how the mainstream media handles coverage of such events as discussed in this article, John Moore of the Liberty Man states: “Like it or not, any balanced mainstream media coverage of serious preparedness whether it be for a terrorist attack or Planet X is simply not going to happen. The tactic is pretty simple: Locate and interview people that are extreme or bizarre in their preparedness and/or beliefs. Interview them as if you are sincere in wanting to convey their story, then print or broadcast an edited story to make them out to be a nut case.” (As quoted in DELICATE EARTH: HISTORY, SCIENCE, PLANET X by MarkHazzlewood, p 30).
Mark Hazzlewood adds, “The controllers of the mainstream media will not allow mention of cataclysm caused by extra-solarobjects simply passing by. When impact asteroids are mentioned they say it could never happen in our lifetime (millions of years between events) or the chances are extremely low. Usually with Planet X sllence is also their tactic. However, if it is brought up many times they label the messengers or informed part of a cult, crazy scammers, or at least say again it won’t happen in our lifetime if it is even real They make sure to use any and all words and phrases that promote skepticism when discussing it.” (Ibid, p 31 ).
So there you have it, at least the basics, concerning how the media handles the truth concerning coverage and cover-up of so-called “natural disasters” as well as the very real natural disasters caused by an external trigger mechanism (Planet X and its entourage). So this is a synopsis of the news behind the news about our strange weather and escalating Earth changes.
There is a very real covert program to use WEAPONS of MASS DESTRUCTION whether man-made (i.e. wars, contrived disasters, etc.) or naturally God-controlled (i.e. increased seismic activity, strange weather patterns, solar storms, etc.). We have stated it before and we will state it again, WE LIVE IN A FALSE REALITY! This is kept in place by WEAPONS OF MASS DECEPTION!
[AUTHOR’S NOTE: We are planning on doing a special report on Planet X as it relates to the Chastisement and other End Times events in-cluding a preparedness survival plan.}