COMETS: SIGNS OF THE COMING CHASTISEMENT 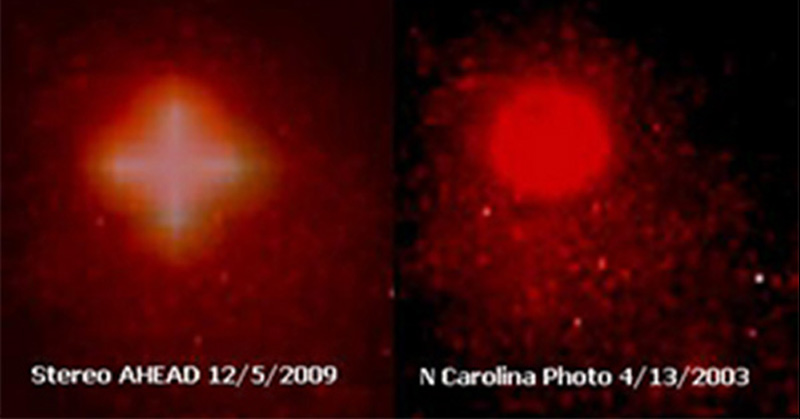 The Great Warning also called the Minor Chastisement, is the beginning of a series of events involving magnetic waves traveling from deep space that will apparently trigger solar novas and flare-ups. These great magnetic waves from deep space could be a sign of greater occurrences within the center of our galaxy; and could be the reason so many comets and asteroids are being sent our way. Several of these are as precursors or signs of the chastisement. Others may be involved in the Warning, and one particularly large comet apparently is involved in what has been termed the “Storm” of the Great Chastisement. There are several comets and asteroids as of recent times, approaching close to the Earth. We examine some of these here.

*Comet Enigma “XXX.”  A Canadian scientist, Jose Chung, well known expert in digital imaging technologies reported on several space objects; asteroids, comets, etc. in the October, 2002 issue of Graphic Exchange.  He examined several NASA photos of these images; and as he began to research these images he began to encounter problems. NASA began withholding some of these images. “Though originally content with the quality and volume of space-related information dispensed by ‘official’ sources, he gradually waxed more dissatisfied as increasing amounts of vital information began to disappear from publicly accessible databases.” (From note on author, NEXUS NEW TIMES, Vol. 10, No. 2, March/April, 2003, “Enigma: A Close Call From Deep Space “ by Jose Chung, p 33).
Enigma passed through our solar system during the course of 2002 and the early part of 2003. Chung states that Enigma “weighs in at roughly 18 times the mass of the Earth (in a package only about a quarter the size of the Moon).” He goes on to say, “Early to mid March 2002: Passing just south of the main ecliptic plane of our solar system at a point very close to our own position, the collapsed star (or Black Dwarf) known as Enigma will pass within 300,000 kilometers of our planet at a speed of about 120 kilometers per second, trailing a tail of debris and cinder-like iron and carbon filaments.. When these strike the atmosphere, they will almost immediately oxidize and precipitate in the form of red rain. This may also occur during November 2002 [it did happen over India], as it did during the month of August, when several reports of this phenomenon came in from Vietnam and India. Red fireballs streaking across the sky are also to be expected as larger pieces of debris brush through our resistant atmosphere.” (Ibid, p 32).

*Planet X: Comet of the Chastisement?   In Winter of 2003 DIAMOND STAR RESEARCH published the following report on Planet X:

Another thing to be noted is that the understanding of Planet X has been in a constant state of flux as new information comes in and is analyzed plus continuing efforts by Officialdom to confuse the issue. We have false stories, false predictions (i.e. that Planet X will hit the Earth, etc.) and false arrival times: 2003; the 2002-2007 scenario, and others. All these things thrown into the mix has made Planet X a very confusing issue for some. Despite this, there have been dedicated scientists, journalists, and researchers who have weeded out the erroneous and deciphered the truth about this very important threat to our home planet. Dedicated seekers such as astrophysicist, James McCanney, Mark Hazlewood, Jaysen Rand and several others have brought the matter into clear focus in a way that it fits squarely into our End Times reality.
Finally, the events now occurring concerning our solar system and especially our Earth, and disturbances on the Sun indicate that Planet X’s approach is being felt. Furthermore, these events relate directly to the Apocalypse of Saint John and Marian prophecies concerning the End Times Divine Chastisement, etc. This is in the Necedah Secret (See Volume 3, Appendix C) and in the Secret of Fatima.
Relative to the coming Divine Chastisement in which Planet X seems very much involved, is the statement of Pope John Paul II. The German magazine, “Stimme des Glaubens,” has published an account of the Pope’s interview with a small group of German Catholics on his visit to Fuida, in November of 1980. In response to the question, “Holy Father, what has become of the Third Secret of Fatima?,” the Pope stated, “…(I)t should be sufficient for all Christians to know this much: if there is a message in which it is said that the oceans will flood entire sections of the Earth; that, from one moment to the other, millions of people will perish … there is no longer any point in really wanting to publish this secret message. Many want to know merely out of curiosity, or because of their taste for sensationalism, but they forget that ‘to know’ implies for them a responsibility. It is dangerous to want to satisfy one’s curiosity only, if one is convinced that we can do nothing against a catastrophe that has been predicted.”

* The Two Suns. Yet another aspect to consider in the End Times scenario is the phenomenon of the Two Suns. This has been filmed in at least two different locations and times in 2009 and posted at the 2012 Warning website (www.2012warning.com). One of these was in the Russian village of Chkalovsky in the Vladimir Region on April 21, 2009. At another time it was filmed at an undisclosed location on August 24, 2009. The videos appear to be authentic and can be seen on the 2012 Warning website.
It should be noted that there is a two-sun phenomenon known as a “parhelion” and sometimes is referred to as a “sundog.” This phenomenon has been seen many times and is the result of the sunlight passing through a high layer of cirro-stratus cloud crystals and creating a false “sun.” This false “sun” appears either directly to the right or left or to both sides of the real Sun. This parhelion or false sun appears obscurely but brightly in the clouds or if on a clear day as part of a halo effect, usually on both sides of the Sun (but sometimes only one) as “sundogs.”
There is a marked difference between the two types of phenomena. The Double Sun phenomenon appears at a 45 degree angle, usually to the upper right, from the true Sun; while on the other hand the parhelion or false sun appears at a 90 degree angle on either side of the true Sun. The double “sun” appears bright and distinct in its occurrences, whereas the parhelion or false “sun” is more obscure and less distinct than the true Sun.
The Double Sun phenomenon has been associated with Nibiru or Planet X but just how is not clear. As to what the Double Sun phenomenon really is – is open to speculation at this time. More research will have to be done on it.

This Double Sun phenomenon (where the companion “sun” appears smaller than the true Sun), does, however, somehow tie into the End Tines scenario for it was even prophesied to happen by the Mother of God, Herself. Our Lady of Emmitsburg on June 1, 2008 gave this message: “When you see the two suns on the horizon, you must know
that this is a time of change.”   So it would appear from this prophecy that the Two Sun phenomenon is an indicator or a sign of a change to come for the Earth and its inhabitants. It is also a warning for mankind to turn back to God and change their lives for the better before it is too late.

All the foregoing information comes from alternative news sources or from those who have, because of their professional experience, inner knowledge of such things. For an example of who controls who in relation to the above, particularly in regard to the Never-A-Straight-Answer “Keeper of Secrets” Group, we turn to a very knowledgeable source, Astrophysicist James McCanney. He explains about NASA’s withholding of information: “It’s very clear; I’ve known this for a long time. It is the control of space. … NASA is owned and operated by the NSA (National Security Agency).
“There’s a layer above NASA that controls NASA. Daniel Goldin, who came into NASA in the 1990s, came in from the CIA, and his job was to secretise or put the cap on NASA. What he did is, he went in and the first thing he did was make everybody – top, bottom, sideways who worked for NASA – sign, basically, an NSA non-disclosure agreement.
“The NSA is part of the overseeing government that is already in place. The One World Government is already in place; that’s what all of the stuff going on now is about.” (NEXUS NEW TIMES, Vol. 10, No. 6, Nov./Dec., 2003, “What NASA is Hiding: An Interview With James McCanney” by Rick Martin, p 47).
He goes on to say, “The Vatican has a big stake in the worldwide government, and it’s part of it but not the whole show. It’s very much a worldwide situation, where they’re in every country of the world; they control the politics and the money and the banking. So, it takes a very large web of these people.” (Ibid, p 47).
The fact of the matter is, the Shadow Government, in this case through NASA, does not want anyone discovering the exact mass of the nucleus of any comet. That is why such photos and evidence on the internet is pulled for anyone (who knows his stuff) can calculate the size by its mass as well as other factors. The public must be kept in the dark about the true nature of comets and what is taking place concerning the above matters if their diabolical plans are to succeed.
All of these topics covered in this chapter are signs of the last days as spoken of by Christ, a time of false christs (Mathew 24:23- 28). There will and already are, a great many signs appearing but more are to come as we approach the time of the Warning and the tribulation period before the Great Chastisement.
Along with the signs spoken of in Scripture and in Marian prophecy will be periods of darkness. It should be noted that there are two distinct and separate periods of darkness: one lasting three hours (during the Minor Chastisement); and the other lasting three days (during the Great Chastisement). Both these periods of darkness will be caused by the celestial signs (comets, magnetic disturbances on the Sun (nova) and disturbances (volcanic, seismic activity, etc.) on Earth brought as a punishment upon mankind because of his sins. These two periods of darkness have been confirmed by revelations given to Mary Ann Van Hoof, Sister Faustina, and more recent Marian mystics of our day.
This is a time to prepare for our spiritual and physical welfare.