“CANCELLED PRIEST” JAMES ALTMAN CALLS BERGOGLIO “YOU FILTHY VIPER OF A FAKE, FRAUD OF A POPE” 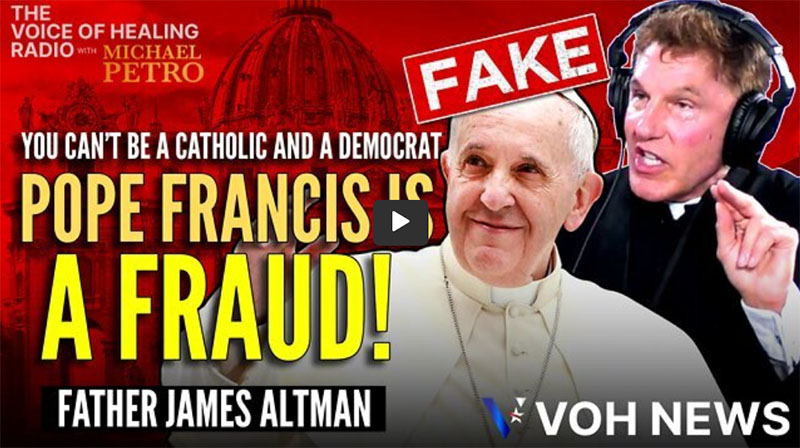 “Father” James Altman, the cancelled priest of the La Crosse Diocese now living with his parents in Wisconsin Rapids, has given an explosive interview on the Voice of Healing Radio on July 23, 2022.  He has given scathing remarks regarding Nancy Pelosi, the Novus Ordo “bishops” and the counterfeit church in general.  As always he gives a very forceful fiery presentation.

He also referred to the Novus Ordo hierarchy (that included Bergoglio) as “losers.”  We point this out because more and more the Novus Ordo conservatives and the “Recognize and Resist” camp are becoming so frustrated and fed-up with Bergoglio’s antics and heresies that they are coming very close to sedevacantism.  In the video, “Explosive Interview with Father James Altman Calling Them All Out,” at about the 15:20 – 15:45 mark Father specifically refers to Bergoglio as “you filthy viper of a fake, fraud of a pope.”  This is, like “Archbishop” Carlo Viganos’s remarks, very hard hitting and to the point.  There is no mistaking these words for words have meanings which will now examine.

Obviously, the word “filthy” is plain enough and means in this case morally “dirty” and corrupt.  The second word, “viper” refers to serpentine venom; poisonous and therefore deadly; a malevolent spiteful person.  The third word, “fake” simply means someone who is pretending to be someone or something he’s not.  It means counterfeit and a fraud; simulating something; an imitation offered as genuine.  Then there is the last word, “fraud.” Fraud means deceit and trickery used to gain some advantage dishonestly; anyone or thing intended to deceive; an imposter.

So using the meanings of these words, we have a man in the Vatican who is dirty, corrupt and poisonous; a malevolent spiteful person who is pretending to be something he is not; a counterfeit and offering himself as though he were genuine by means of deceit and trickery to gain some advantage dishonestly; a deceiver and an imposter.  In short, he’s a fake; a fraud, a counterfeit and an imposter – a false “pope.”  Haven’t we been saying this all along.

“Archbishop” Carlo Vigano has said that what we have in Bergoglio is “a non-Catholic pope.”   Before that we had Michael Matt of The Remnant saying that “Our pope has lost the faith!”  Well, if the so-called “pope” has lost the faith or is a non-Catholic then he is what “Father” Altman has said, a “filthy viper of a fake, fraud of a pope.”  Or as we have said, he’s a false pope.  Jorge Bergoglio, the apostate from Argentina, never had the papacy in the first place.  This has been proven by the late Father Anthony Cekada and our own research.

The question at this point is, will Altman’s statement on Bergoglio wake people up to the VIPER, the FRAUD, the FAKE pope in the Vatican or are they going to continue to make excuses and say, “We pray for the intentions of the holy father?”  No, they  need to wake up now to the VIPER, THE VICAR OF SATAN in the Vatican.