BLASPHEMY!  A FALSE CONSECRATION OF RUSSIA 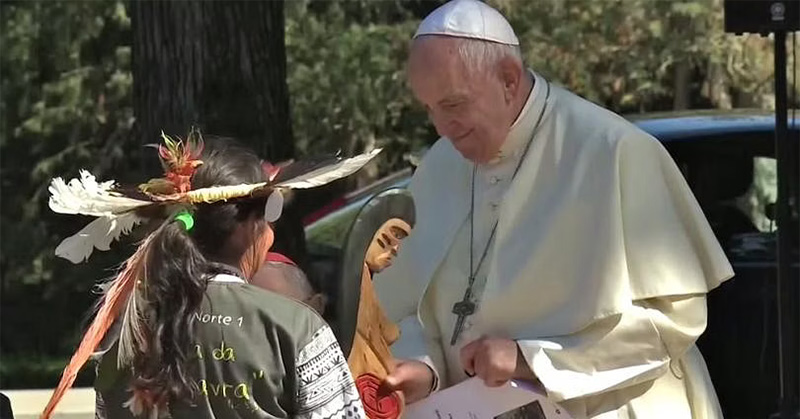 Is the Bergoglian “consecration” of Russia and the Ukraine going to result in peace or incur the wrath of Almighty God?

Many Catholics, traditional or otherwise, are in great enthusiasm and hopeful that at last the consecration of Fatima will be done.  But what will actually happen?  What is being planned?
First of all, let us keep in mind who this man is – Jorge Mario Bergoglio, the Argentine apostate.  He has not repented, apologized to God and His Holy Mother nor made reparation for all the heresies, blasphemies and idolatrous acts he has performed.  He has “blessed” the Pachamama devil-goddess statue, insulted the Mother of God more than once, and presented a false blasphemous concept of God.  Remember, he’s the one who said “I don’t believe in a Catholic God.  There is no Catholic God.” In 2019 he also said, “God wills the diversity and pluralism of all religions.”
Then on February 2, 2022 this pretender-pope said:

“We cannot pretend not to see these signs and continue as if nothing had happened, repeating the same old things, dragging ourselves through inertia into the forms of the past, paralyzed by fear of change.  I have said it many times: today, the temptation to go backwards, out of security, out of fear, to preserve the faith, to preserve the founding charism…  It is a temptation. The temptation to go backwards and preserve ‘traditions’ with rigidity.  Let’s get this straight: rigidity is a perversion, and underneath all rigidity there are serious problems.”  [As quoted in “Bergoglio Calls Adhering to Tradition a Perversion” by Bishop Donald Sanborn. Bp. Sanborn’s Blog. www.inveritateblog.files.wordpress.com.  February 23, 2022.]

Since then, yet more heresy:

“Let us consider, dear brothers and sisters, that in Christ no one can ever truly separate us from those we love because the bond is an existential bond, a strong bond that is in our very nature; only the manner of being together with one another that changes, but nothing and no one can break this bond. ‘Father, let’s think about those who have denied the faith, who are apostates, who are the persecutors of the Church, who have denied their baptism: Are these also at home?’  Yes, these too.  All of them. The blasphemers, all of them.  We are brothers.  This is the communion of saints.  The communion of saints holds together the community of believers on earth and in heaven, and on earth the saints, the sinners, all.”  [As quoted in “Yet Another Heresy From Heresy-Mouth” by Bishop Donald Sanborn.  Br. Sanborn’s Blog.  www.inveritateblog.files.wordpress.com.  February 23, 2022.]

According to Pope Pius XII, only those to be considered members of the Church, the Communion of Saints, are those who have been baptized into the faith and profess the true faith.  [Encyclical: Mystici Corporus Christi #23, June 29, 1943.]
Keep all this in mind and now we have Catholics thinking he’s going to do a one-eighty and consecrate Russia to the Immaculate Heart of Mary.  Right?  As the Protestant pastor Paul Begley would say,  “Are you serious?”
This is being written on the day the supposed “consecration” is to be done.  Yesterday, March 24th, Feast of the Archangel Gabriel, we came across a live-stream video of Dr. Taylor Marshall talking about this very thing.  The title to this video is quite telling: “Consecration of Russia to the Pachamama?”
In it he raises some good points on the translation of the text of this so-called “consecration” prayer.   The particular words in question are the words supposedly referring to the Immaculate Heart of Mary.  In English it is translated as “Queen of Heaven.”  In Spanish and Italian, it is “tierra del cielo.”  In Portuguese, it is “terra do ceu.”  Also in Russian, Ukrainian, and in Arabic it is about the same as the Spanish.  These words mean “Earth of Heaven,” a rather nonsensical term.  In Polish, it is “zienio nieba.”  The Slovic term means “Land in the sky.”
The term translated as “Earth of heaven” is also translated as “land of the sky.”  In other words, it is the Mother Earth of the sky (also called “heaven”) goddess.  This is the Pachamama, the Mother Earth Sky devil-goddess of the Amazon.
This, as many have already discerned, cannot be a mistranslation, but a deliberate effort to put in a different meaning, to obfuscate its real meaning.  For example the Spanish or Italian term, “tierra del cielo” supposedly referring to the Blessed Virgin Mary actually refers to something else altogether.  Those who know Spanish well have pointed out that the correct Spanish term referring to the Mother of God is “Reina el las cielos e Saberana de los cielo.”
[Note: Actually the Italian term is precisely, “terra del Cielo,” the language the so-called “pope” most likely will be using.  This perverted term has never before been used in these languages and has a meaning of “land in the sky.”  This is a direct reference to the Pachamama, the murderous devil-goddess.  It is a Pachamama title.  It is really “wenu mapu” in the Mapuche language and religion of the indigenous people of the Amazon.]
Remember the Amazon Synod?  “Pope” Francis desecrated the center of Christiandom, St. Peter’s Basilica in Rome.  It would have to be reconsecrated – it has not been.
So to cut to the quick – this false pope is going to consecrate Russia and the Ukraine to the Pachamama, the murderous devil-goddess, albeit in a obfuscated way, and mock the Mother of God, thereby incurring the wrath of Almighty God upon this world.  This will not bring peace, as many expect, but the wrath and chastisement from God.  Though temporarily things may seem to improve in certain quarters only as a façade – a false “peace” – in the long term things are due to get much worse with a possible World War III being unleashed bringing on the Great Tribulation of the End Times.  A great punishment from Heaven, a rain of fire will be unleashed as the great comet-planet foretold by prophecy will come.
Make no mistake – this is serious.  Instead of a true consecration, we will have a false “consecration,” a mockery and an invocation to the devil-goddess, Pachamama.
[Note:  This writer has a brother-in-law who always prayed this “pope” would consecrate Russia to the Immaculate Heart.  Whenever he made this intention, I said to myself this false pope would never do that – he’s too interested in the Pachamama.  This proves it. Bergoglio, being a false pope couldn’t consecrate a mud puddle.]