BERGOGLIO AND THE END OF OUR AGE 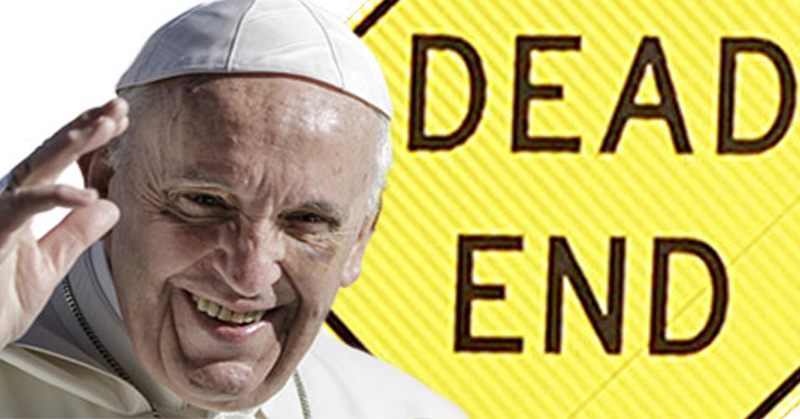 The end of this corrupt civilization is close at hand.  Our Lady of La Salette warned us the Church would be eclipse and the world in dismay.  Well, take a look around  – we’re there!  The Earth is experiencing unprecedented floods, storms, seismic activity, volcanic activity, fireballs and strange phenomenal events: mass animal deaths, waters (rivers, lakes, seas, even tree sap) turning blood-red; sink holes and landslides; wet and flooded deserts while at the same time forests extremely dry with wildfires out of control (some natural, some man-induced); strange skies with strange sounds; king tides and extreme never-before-seen low tides and a whole lot more.  Things are escalating and will continue to get worse.  We are nearing the seven years of tribulation for both the Church and the world.

In the meantime society has only gotten more corrupt and rotten, more now than its ever been.  It is causing God’s wrath to come as the signs in the heavens and on Earth are now indicating.  Add to this the fact we live in a false reality with the truth being blacked-out or being attended by a bodyguard of lies.  But of this false reality most all people are unaware.  The economic system is false with a devalued and electronic “currency.”  The Federal Reserve is neither Federal nor a reserve.  The healthcare system is a fraud – it’s really a sickness-management industry; history has been blacked-out with propaganda and revised “history in its place; science is based on false theories and fabricated experiments, etc; the educational system has become an indoctrination system; the media creates contrived stories and fake news; and a lot more.  Most of what you hear and see (and are taught cradle to grave) is propaganda or biased news, whether secular or religious.

In short, we are being treated like mushrooms: Kept in the dark and fed crap!  (By the way, the slang definition of the word, “crap,” means, “nonsense, junk, misleading statements.”

Now on top of all that we have a false or counterfeit church masquerading as the Catholic Church, complete with a false pope.    Jorge Bergoglio is the worst of the false popes ever, who seems to be frantically preparing as much as he can for the arrival of the Antichrist.  This man is not only an apostate and heretical antipope but is antichrist for what he is doing is not for Christ but against Christ.  What he is doing is apocalyptic and indicates the END is very near.  See this video: “The Youth Synod and the Millstone – End of Days.”

There is evidence this man is the false prophet and very diabolical.  He is not the Vicar of Christ but the Vicar of Satan as the following video indicates: Francis’ Witching Staff, Occult Vatican Ritual.”  [https://www.youtube.com/watch?v=IC_402p6jGI.]

Satan has ascended to the top of the Church as prophecy has indicated.  See this video: “Padre Pio: ‘Satan’ Would ‘Come to Rule a False Church.”

Furthermore, La Salette has warned that “Rome will lose the faith and become the seat of the Antichrist!”  Believe it or not – we are there!  Now take the following quotes to heart:

“To adhere to a false bishop of Rome (a false pope) is to be out of communion with the Church.”   – Saint Cyprian.

“Not to oppose error, is to approve of it, and not to defend the truth is to suppress it; not to confound evil men when we can do it, is no less a sin than to encourage them.”  – Pope Felix III.

“He that sees another in error, and does not endeavor to correct it, testifies himself to be in error.”  Pope Leo the Great.

This is the final article in this trilogy of articles.  You either understand what is given here and in the links provided or you do not.  Don’t follow the “recognize and resist” crowd.  Try THINKING FOR YOURSELF FOR A CHANGE AND GET OUT OF THE NOVUS ORDO  – that is, the NEW WORLD ORDER CHURCH NOW FORMING IN FRONT OF YOUR EYES!

One last thing:  Consider the words of Pope Pius XII:

Now tell me, does Jorge Bergoglio profess the true Faith?  All the evidence says NO!

Our Lady of La Salette and Saint John, the Apostle, both have warned that Rome would become pagan again.  In Apocalypse 17:8, it states, “And the dwellers on earth whose names have not been written in the book of life from the foundation of the world shall wonder when they see the beast that was and is not and is to come.”   This is referring to Rome which was pagan, then became Christian, and finally now, has become pagan again.  See this video, “This Explains the Post-Vatican II Confusion and Crisis.”  [https://www.youtube.com/watch?v=z5w9RvyvI44.]